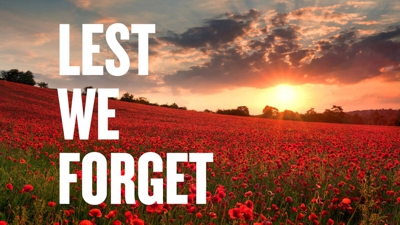 Last Wednesday was ANZAC Day. Did you know that the phrase “Lest we forget” used to commemorate those who died in warfare came from the Bible? It came via the poem “Recessional” by Rudyard Kipling which was written towards the end of the 60th anniversary celebrations of Queen Victoria’s reign in 1897. These turned into a celebration of the power of the British Empire.

The poem was written to be sung as a hymn at the end of a church service. It acknowledges that God helped establish the British Empire. But all human power is transient and Empires eventually decline and disappear. It warns the English to be humble instead of boasting about their achievements. The main warning is not to forget God. The chorus is:
“Lord God of Hosts, be with us yet,
Lest we forget—lest we forget!”
So the context is God, not those who have died.

The title “Lord of hosts” comes from the KJV of the Bible (1 Sam. 1:3), which can be translated “Lord Almighty” (NIV), “Lord of Armies” (CSB), or “Lord of Heaven’s Armies” (NLT). It means that God is sovereign over all other powers in the universe.

The phrase “Lest we forget” comes from a warning given to the Israelites after they settled in the promised land. It says, “Then beware lest thou forget the Lord, which brought thee forth out of the land of Egypt, from the house of bondage” (Dt. 6:12KJV). Or, “be careful not to forget the Lord, who rescued you from slavery in the land of Egypt” (NLT). They were not to forget what God had done for them. But we know that the Israelites did forget God and followed idols.

So “Lest we forget”, was a call to not forget God. But this song was also sung at remembrance services for those who died in warfare. And in this context, it was a call to not forget those who had given their lives for their country. The meaning of “ancient sacrifice” in the song changed from Christ’s death to the death of soldiers. This is an example of how words and phrases can change their meaning over time.

As the Israelites were God’s people in Old Testament times, Christians are God’s people today. And like them, we are not to forget what God had done for us. We too can easily forget God and the ancient sacrifice of Christ for us. He gave up His life so we could have eternal life.

“Lest we forget”. Don’t forget God!