Do you ever forget where you put your keys, phone or glasses? Have you ever gone into another room at home and wondered what you went in there for? We all forget some things and forgetfulness can be a normal part of aging. We get memory lapses. Our brain doesn’t function as well as it used to.

Mary couldn’t find her car keys. She looked on the hook just inside the front door. They weren’t there. She searched in her purse. No luck. Finally, she found them on her desk. Yesterday, she forgot her neighbor’s name. She decided to see her doctor. After a complete check-up, her doctor said that Mary was fine. Her forgetfulness was just a normal part of getting older. The doctor suggested that Mary take a class, play cards with friends, or help out at the local school to help her memory.

The worst kind of forgetfulness is to forget God and what He has done. The Israelites forgot God during the exodus from Egypt. When they got to the Red Sea they forgot God’s kindness in releasing them from slavery (Ex. 14:10-12; Ps. 106:7). So, they rebelled against Moses. Three months later, they came to Mount Sinai where they received the ten commandments (Ex. 19:1). Then while Moses went up the mountain for 40 days (Ex. 24:12-18), they forgot the exodus and the ten commandments and made a gold idol in the shape of a calf and worshipped it (Ex. 32:1-8). Because they forgot God, the Israelites complained to Moses. Later they were told to never forget the exodus (Dt. 6:12; 8:2) and to never forget the God who delivered them from slavery in Egypt so they could settle in Canaan (Dt. 8:11,14).

In Psalm 103, David said to never forget the good things God has done (v.2-5). For a believer this includes forgiveness. And whenever we are healed, it’s because of God’s mercy and how He designed our bodies. He protects us from many dangers, accidents and tragedies. We also receive God’s love and compassion. And He satisfies our longing as we live for Him.

In the seventh century BC, the book of the Pentateuch (law) was discarded or lost during the reign of the ungodly kings Manasseh and Amon. No one had read God’s Word for at least 40 years! But in about 622BC, it was found in the temple during the reign of king Josiah (2 Ki. 22:8; 2 Chr. 34:14-15).

God told the Israelites, “do not forget the things your eyes have seen or let them fade from your heart as long as you live. Teach them to your children and to their children after them”(Dt. 4:9).

And the Passover and Unleavened Bread festivals and the consecration of the firstborn were God-given reminders of their deliverance from slavery in Egypt (Ex. 13:8-9, 14-16).

So, teaching Scripture and continuing to do what God had commanded them was the antidote to their forgetfulness. 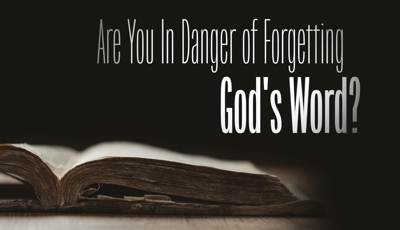 Like the Israelites, we are also forgetful. When we are self-centered, we forget God. The cure for self-centeredness is to remember what God has done (Ps. 77). And God has given us resources to combat our forgetfulness. We have Scripture [the Bible] which is a record of what God has done and what He has commanded. We also have prayer and the Holy Spirit to remind and strengthen us.

Forgetting God is worse than COVID-19. Let’s remember God’s deliverance and provision for us. Don’t be like the Israelites and forget to remember God. Don’t be a spiritual COVID casualty.